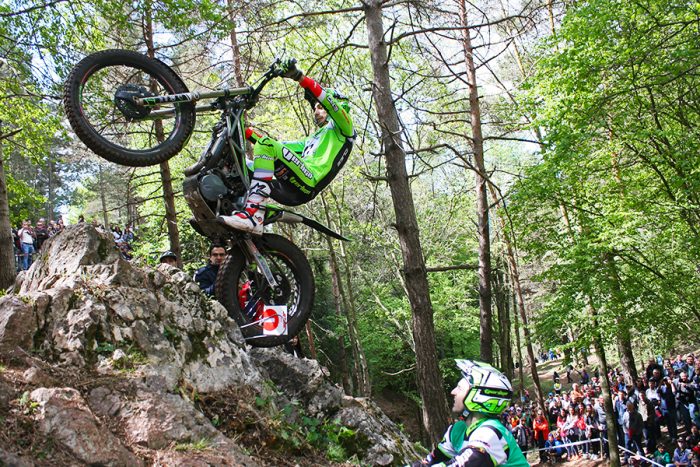 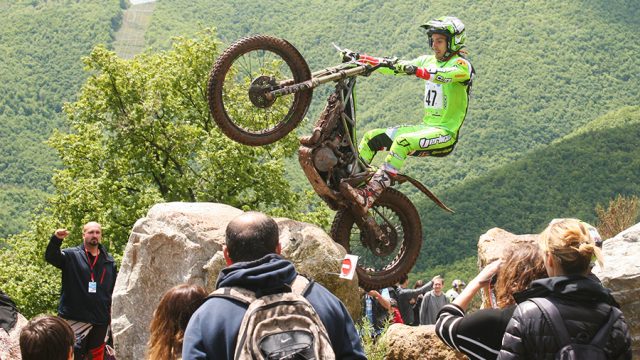 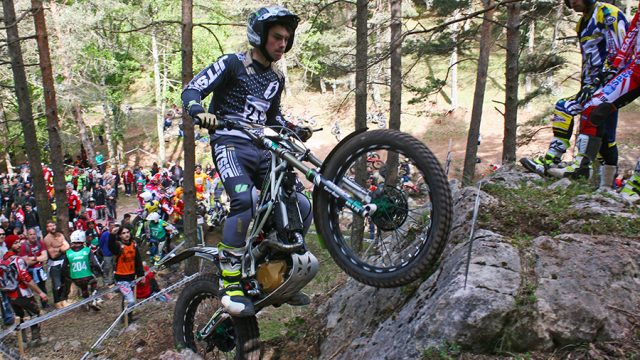 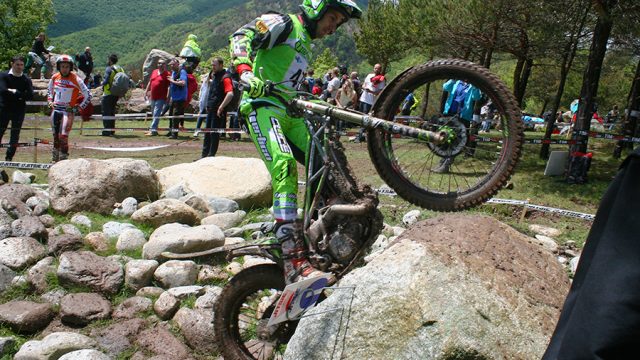 The rain has been the main protagonist of today’s opening round of the TrialGP World Championship. Raining heavily in specific moments during the morning, climatology has increased even more the level of the already exigent sections.

In front of an amazing crowd, Jeroni Fajardo and Toby Martyn began their way in this new era of TrialGP with great ambitions, as both of them were arriving to Camprodon after achieving outstanding results in this first part of the season. Jeroni clinched some months ago the 3rd place of the FIM X-Trial World Championship, and Toby Martyn has been in a great shape so far at the European Championship, where he even won the opening round.

The young Brit, who was starting inside the Trial2 group, has been able to complete the first lap around the 15 hazards without being affected by the rain, delivering his target with 24 marks. Jeroni Fajardo hasn’t had the same luck, as just in section 11, the rain started to fall down heavily, leaving the remaining 4 sections in quite tricky conditions. The rocks turned really slippery, and mud came out to quit grip, so any small mistake was easily a five. Despite that fact, Fajardo has managed to end the first lap with 40 marks in his card, being 4th at this point of the race.

When in the second lap, all the riders were forced to face the 15 sections under equal conditions. Once again, Fajardo had to give his best, and so he did by adding only 4 marks to his first lap punctuation,ending with 44. It was an amazing effort by our rider, specially taking into account that the hazards were getting harder as riders were going through. In the last quarter of the race, a group of 4 riders found themselves fighting for the 4th spot, with Fajardo, Fujinami (Montesa), Casales (Beta) and Busto (Montesa) separated by a small gap. In the end, it was Fajardo who managed to get better punctuation in the last sections to snatch the 4th place, with the other riders finishing in this same order.

Toby Martyn didn’t have the same luck in this second lap, where he ended with 37 marks, 13 more than the 24 he scored in the first one, to finish this opening round of the TrialGP World Championship 10th in the Trial2 class. Even though, it has been a demanding race for Martyn, that allows him to keep on with his progression inside the World Championship.