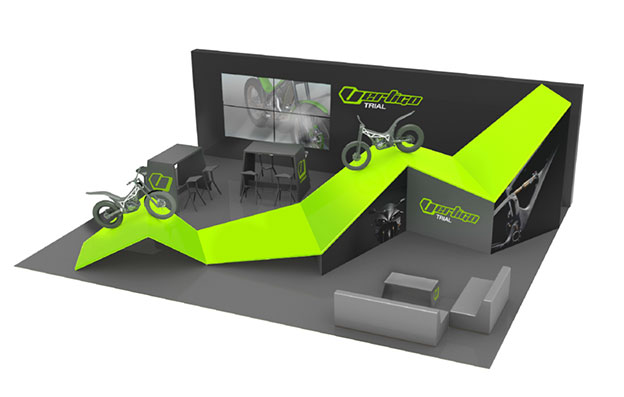 Vertigo Motors is delighted to announce the official World launch of their new Trial model at the famous EICMA motorcycle exhibition to be held in Milan, Italy from 6th to 9th November 2014.

The new Spanish manufacturer will unveil two versions of its much-anticipated Vertigo Combat Trial model – Camo and Ice Hell – to the media and public after many months of planning, development and testing behind closed doors at its headquarters in Barcelona and in a private location in the Spanish mountains.

The all-new Vertigo Combat is set to define new standards within its field with many innovative features designed to deliver improved performance and overall experience to the rider. The project has been a real collaboration of minds, with input from clubman riders, design engineers, a multi World Trial Champion and product designers.

Twelve times FIM Trial World Champion Dougie Lampkin has been a key and integral part of the evolution of the Vertigo Combat and will be present in Milan to unveil the new machine.

Speaking about the imminent launch Lampkin said. “It has been an amazing journey to be a part of the birth of a new bike right from the start. We had a clean piece of paper and have been able to choose all the best elements, which as a team we felt would be most important to the end user, be that a clubman or a World class rider.”

“So much time and thought has been put into every detail of the bike, as we are all aware of the weakness and strengths of our rivals and wanted to make sure that we created a package that was strong in every point.”

“The team has worked tirelessly in order to produce a bike that we can all be very proud of. We have spent many hours riding the new bike and to ensure its performance and reliability as we know our first model will be the most important model in the story of this exciting new brand.”

Dougie rounded off by adding. “During my long career I have experienced many special moments, and I am sure when we pull the covers off the Vertigo Combat in Milan in less than two weeks, it will be another great moment and one I am very much looking forward to as I think everyone will be very happy to meet a bike that will take Trial to a new level.”

The new Vertigo Combat can be found at stand G77 in hall 18 opposite the Ducati stand.

ECIMA takes place at Fiera Milano, SS. 33 del Sempione 28, 20017 Rho, Milan. Press and trade visitors are welcome from Tuesday 4th November with prior accreditation. The exhibition is then open to the public from Thursday 6th November to Sunday 9th November inclusive.