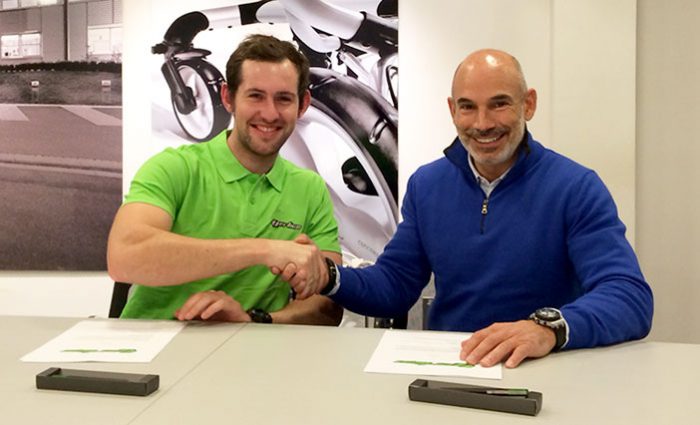 Vertigo Motors is delighted to announce the signing of James Dabill to ride their newly launched Combat Trial model with immediate effect from 1st December 2014 for a two-year period.

The new Vertigo rider will make his debut on the Spanish built bike at Sheffield Arena on Saturday 3rd January, which will mark the opening round of the 2015 FIM X-Trial World Championship. Vertigo Motors feel it is an important part of the on going development process, for their new Combat model to compete at the highest level in order to deliver the ultimate production version in due course. So aside from sporting success, the team will also be focused on further testing, evaluation and refinement of their prototype machines ahead of its general release.

Speaking about the signing Vertigo Sports Team Manager Dougie Lampkin said. ‘We are extremely excited to have James (Dabill) joining us ready for next year. Obviously I know James very well and he is a rider who has a great level of talent. We will be looking to give him our full support to ensure that he achieves the results both he and Vertigo are looking for.‘

Lampkin closed by saying. ‘Having James ride the Vertigo for the first time at Sheffield will be a special moment for us all who are involved in the project, and one we are all really looking forward to.‘ Dabill expressed his equal excitement about this new opportunity. ‘Firstly I would like to thank Beta for their support over the last four years. I have enjoyed my time with them, but felt now was the right moment for a change.‘

‘To have the chance to work with Dougie (Lampkin) and the rest of the Vertigo team was not a chance I wanted to miss. It is a great project to be involved with and has already given me the fresh motivation I perhaps needed at this stage in my career.‘

‘As a team we have got a lot of work to do, which is the same with any new bike, but the great news is that we have got a really experienced group of people who are ready to do what ever it takes to make sure we get to the level we are all looking for.‘

‘I can’t wait to get testing and I am really excited about my first proper outing on the Vertigo at Sheffield in a few weeks time.‘ Ended Dabill.